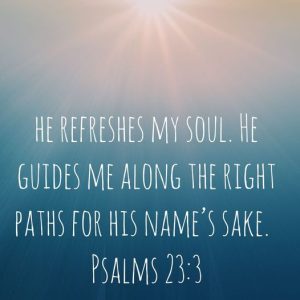 Happy New Year from us all at International Aid Trust.

May God refresh you and guide you as we begin 2022

Thank you very much to everyone who has donated for a ‘Virtual Shoebox’!

This video shows the first of these gifts, funded by donations from supporters in the UK and packed by the team in Ukraine, being given out at a Christmas service at Soborna (Unity) Church.

If you’d like to send a virtual shoebox yourself, you can find out more here: Virtual Shoeboxes – International Aid Trust 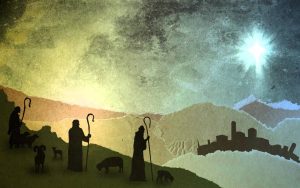 From the Founders Desk

Luke 2:8-12  And there were shepherds living out in the fields nearby, keeping watch over their flocks at night. An angel of the Lord appeared to them, and the glory of the Lord shone around them, and they were terrified. But the angel said to them, “Do not be afraid. I bring you good news that will cause great joy for all the people. Today in the town of David a Saviour has been born to you; he is the Messiah, the Lord. This will be a sign to you: You will find a baby wrapped in cloths and lying in a manger.

After the birth of Jesus, an angel appeared to a group of shepherds. At that time shepherds were looked down upon and considered unclean, they were not even accepted as witnesses in a court of law. Therefore, it’s important to note that the news of Jesus’ birth was given first to the lowliest of people. Please see the importance of this statement: The lowly guardians of the sacrificial lambs were the first ones to hear of the birth of Christ is a wonderful truth, but there is a more important point to be made here. These shepherds were a bit special. They were the keepers of the sacrificial lambs. The lambs that were reared each year for the sole purpose of being sacrificed to God in the temple in Jerusalem for the forgiveness of sins. (This is the reason that the lambs were kept in the fields close by) They had to be male lambs and without blemish, it is important to know this because Jesus, the Perfect Lamb of God, was born to give his life as a once and for all sacrifice that would take away the sins of the world for ever – for everyone who believed.

The Angels Understood the True Meaning of Christmas, with the announcement of the birth, the angels burst into song, and the heavens opened to reveal their joy. The birth of Christ was long awaited, heaven was visible from the earth, and angels proclaimed the most important news in history, and they gave it the poor first, not the theologians in Jerusalem, but to the shepherds just “outside” the city walls… So, the message then, and still is today, that Jesus came for the lowest, the poor and lost, those just “outside” our accepted society.

Luke 2:13-14 Suddenly a great company of the heavenly host appeared with the angel, praising God and saying, “Glory to God in the highest heaven, and on earth peace to those on whom his favour rests.”
So, who are these on whom His peace and favour rests? Some take this out of context as a blanket statement of peace on earth. But true peace only comes to those who believe in Christ and believe in the sacrifice he made for them. It’s not saying that the entire world could not experience peace. They can, but only when they accept God’s saving grace and favour through the shed blood of Christ.

John 3:16-17 For God so loved the world that he gave his one and only Son, that whoever believes in him shall not perish but have eternal life. For God did not send his Son into the world to condemn the world, but to save the world through him.
Only by having a relationship with Christ can we find that perfect peace, and then we know that whatever happens, whatever we go though through, and whatever is happening in this hurting world, we will spend eternity with our creator and Saviour.

For the last thirty years, with your help we have shared, and continue to share this Good News changing lives forever because you care.

May you experience and share God’s peace over this season and in 2022.

Welcome to the International Aid Trust Advent Reflection for 2021.

In all the busyness as we approach Christmas, we hope you’ll join us is taking time out to reflect on the first Christmas.

There’s also a Bethlehem scene to create and areas of our work around the world to pray for.

Some days there is a Bible verse to help us think about the journeys taken to Bethlehem that first Christmas.

Some days there are areas of our ministry to give thanks and pray for.

We hope and pray that it will help you take some time out from the busyness to reflect on the real meaning of Christmas. 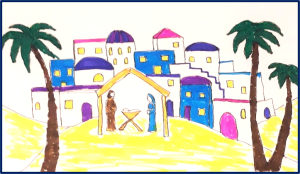 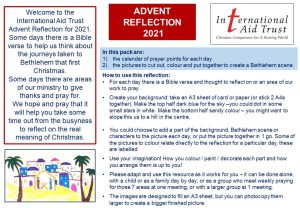